A service is something that is important to you, that you want to know the status of. Services can be "active" (checked on a regular basis) or "passive" (waits to be given data). This document will focus only on "Active" Service Checks.

All Services (also called a Check or a Service Check) have a status, one line of output and (optionally) some performance data.

Services are regularly checked based upon their check interval. Each Service is checked independently of other Services and all have their own timing schedules.

Hosts are also checked. This can be on a regular basis (if its host check interval is defined). The Host will also be checked “on-demand” by the monitoring engine whenever a Service has changed state.

Note: Hosts without any services will not be shown in the monitoring status pages.

Services have one of 4 possible States:

Hosts have one of 3 possible States:

If a Host is DOWN, then the Services on the Host will be marked as CRITICAL with the summary text of "Dependency failure: Host X is DOWN". Service will no longer be executed until the Host has returned to an UP state.

All active checks use a plugin. This plugin will have the actual logic to know how to check something to determine its Status. For example, a plugin will know how to communicate with a DNS server, or how to interrogate for free filesystem space, or how to get a web page.

The same plugin can be used many times for different services. It takes parameters to determine what to check or what the threshold levels are.

The parameters available are dependent on the plugin used.

After a plugin has run, it must return a status code to Opsview - which maps to one of the OK, WARNING, CRITICAL or UNKNOWN statuses. It must also return some summary text.

The plugin may also return some optional performance data which Opsview will record and can later be used in performance graphing.

When the active check for a service runs, it is executed on a set frequency (by default 5 minutes). This is called the check interval.

Usually, services are in an OK state, showing that service is stable. However, if a problem occurs and the service changes to a different state, we need to have confidence that this is the correct state. We use state types to highlight this confidence factor.

Services can have one of two state types:

There are two important parameters to determine the soft and hard state types:

The check attempts will be displayed as 3/5, which means the third check with a maximum of fix before it becomes hard.

When a service has gone into a hard state type, then the check attempts will revert to 1.

Note: If a service changes from one problem state to another, the check attempts are reset.

This same logic also applies for an OK state.

The main reason for state types is that notifications are sent on hard states only. This avoids sending notifications for temporary problems.

Notifications are sent on hard state changes only. This means notifications will be sent for hosts or services only when they have been in a particular state for a "check attempts * retry interval" amount of time.

Notifications are also sent when a host/service returns to an OK hard state. This is called a hard recovery notification.

Notifications are executed in parallel.

Notifications are suppressed if:

Event Handlers
Event handlers are an external script that is executed when a result is returned. There are three possible options:

Event handlers are executed in parallel.

Lifecycle of a Service

This shows the lifecycle of a service, which transitions from a WARNING to a CRITICAL back to OK state. This assumes the service is run every 31s, with a retry interval of 20s. Max check attempts is 3:

When setting up Hosts and Host Services in Opsview Monitor, it is possible to set up dependency relationships such that the state of one object can affect the state of the objects below it in a dependency tree. To learn more about setting up object dependencies read Active Checks - Details Tab: Advanced.

One example of where a Parent and Child relationship would be useful to set up would be a relationship between a Virtual Machine (VM) management server host and the VMs running under that host. In this case the VM management server host would be set as the parent host, and the VMs running on it would be the children. If the parent management host goes DOWN, the children VMs would be set to UNREACHABLE with a message on the investigate window indicating the dependency failure and the parent host responsible. Likewise, the service checks of both parent and child hosts will go into dependency failure and will be set to CRITICAL.

An example of a useful Parent and Child relationship applied to service checks would be one between a parent SNMP agent check and child SNMP interface checks. The parent service checks that the snmp agent is up, while the children monitor the snmp interfaces. Should the snmp-agent fail, there is no point in monitoring the interfaces as these won’t be up. Thus by having the SNMP agent be the parent, we ensure that when it goes CRITICAL the monitoring of the children services is halted and they go to UNKNOWN state.

What triggers a dependency failure? 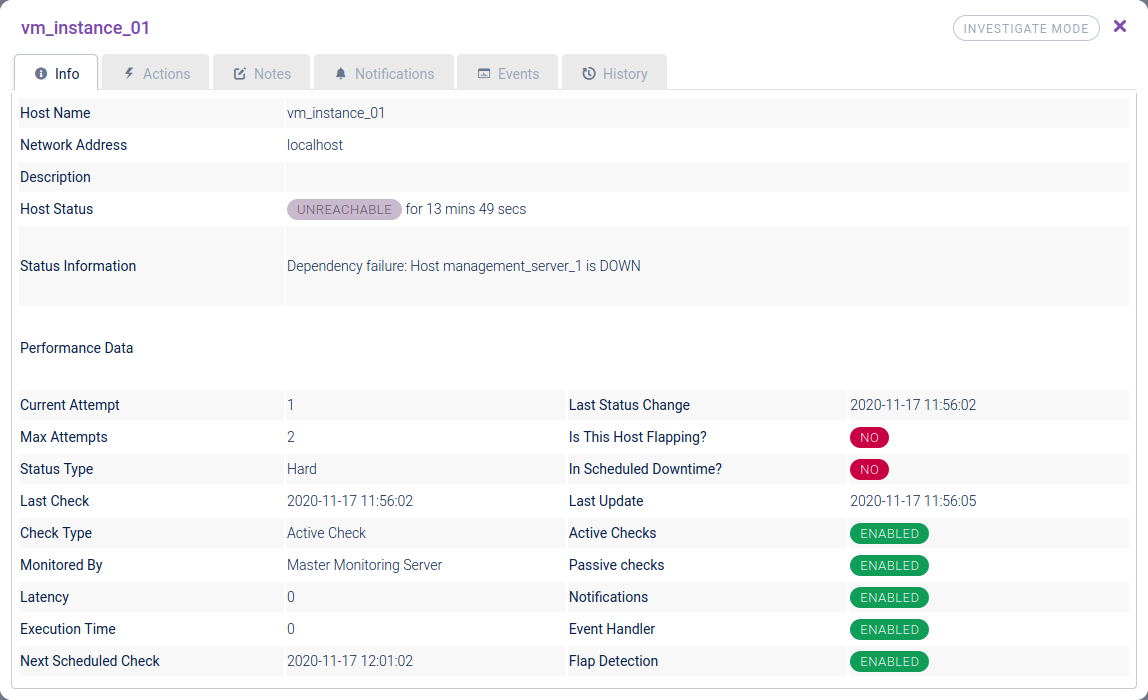 When a parent service goes CRITICAL, the child services will go to UNKNOWN state and the status information will say "Dependency failure: {Parent Service Name} is CRITICAL".

Setting off a manual recheck on the object will run the check a single time. When the check is due to run again, the object re-enters into the dependency failure state.

Because a Host or Service under Dependency Failure is disabled, no new checks are scheduled for them. This means that no notifications or event handlers will run for these objects.