To view the Network Toplogy map for a cluster once it has been generated, you can click the “View Toplogy” option in the cluster menu, within the Clusters tab, on the Configuration > Monitoring Collectors page: 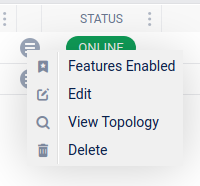 Users require the CONFIGUREVIEW, and either VIEWSOME or VIEWALL permissions to view any Network Topology maps.

Additionally, to view the Network Topology map for a particular cluster, a user must have configure permissions for that specific cluster. This can be set in the Monitoring Servers section, under the Configuration tab when editing a Role (Configuration > Users and Roles > Roles tab). Note that any mention of “Monitoring Server” in this modal really means “Collector Cluster”. A Role can be enabled for a specific set of Collector Clusters here, or for them all using the tickbox:

In the top left corner, you can see the cluster details (name and ID):

In the top right corner, you can see the date and time when the Network Topology map was generated:

Node styles and their meaning:

Node shapes and their meaning:

Link styles and their meaning:

Nodes attached to one or more Opsview Hosts are displayed in the following format:

If the Network Topology features fails to run detection properly against an SNMP-enabled Opsview Host in the cluster, a warning badge will be appended to the node label. This does not mean that detection failed for all Opsview Hosts listed, but that it did fail for at least one:

If there are more than three Opsview Hosts attached to a node the total number of Hosts in that state is displayed for each status type. The node status will reflect the Opsview Host with the highest priority where the priority order is: DOWN, UNREACHABLE, UP, No Status. A pill will only be displayed if one or more Hosts are present in that state.

Unimported nodes are displayed in the following format: 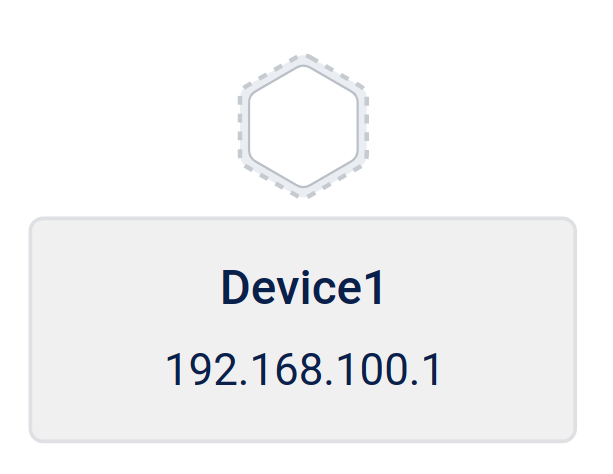 The label under the node displays the device name and IP address gathered during detection.

It may not be possible to detect the device name of a node, without knowing the IP address, in which case the IP address will be listed as “UNKNOWN”: 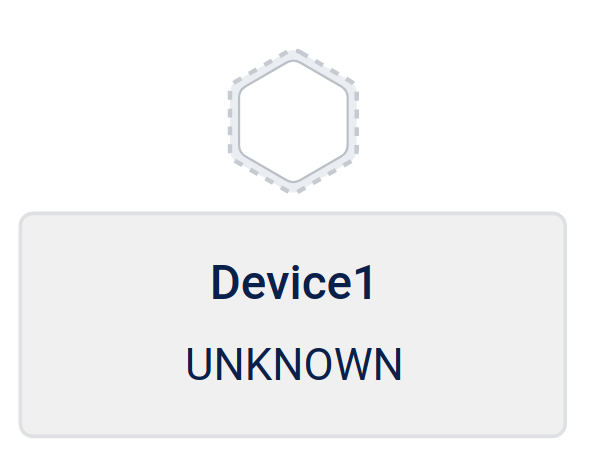 The Network Topology map will represent the relationship between different network addresses as lines between their nodes. This indicates that the two systems are network neighbors - that they are able to share packets via the LLDP or CDP protocol. 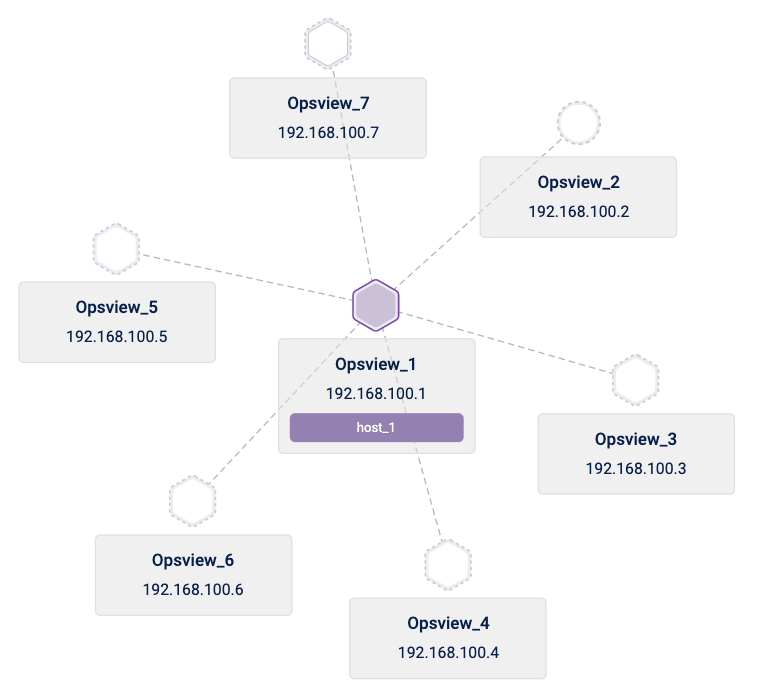 To view more information about a node you can click on the node label to open the overlay panel. This provides additional information about the node, a full list of Opsview Hosts that resolve to that IP address with their current state, and allows you to navigate to each Host: 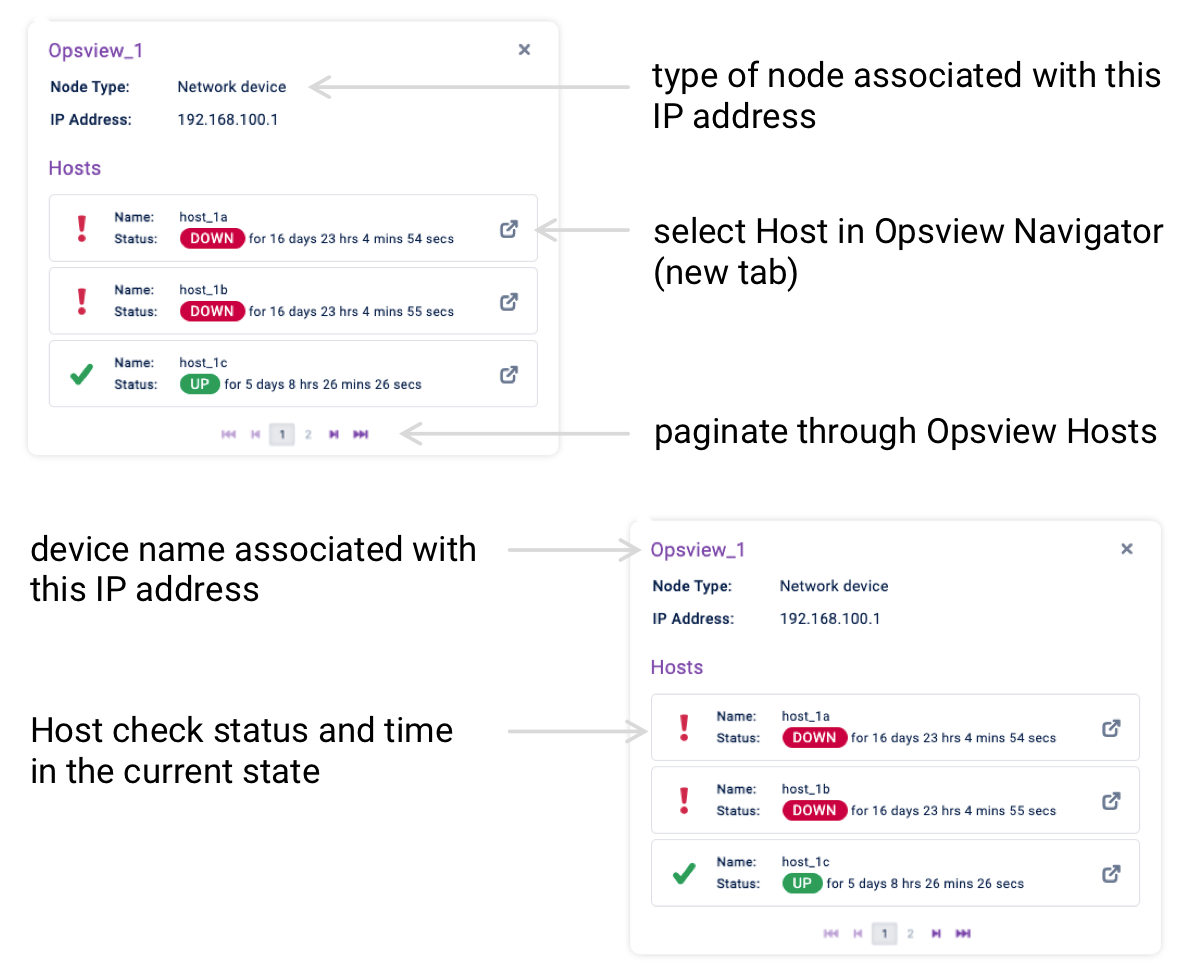 Occasionally, it is possible to detect that a node has neighbors, but without knowing either their IP address or their device name. In this case, rather than representing them as nodes on the map, a badge will be shown on the label of the node which has detected them:

You can click on the label to open the overlay panel and see how many of these unknown neighbors are present:

The Opsview Hosts visible within the map are dependant on which Host Groups the user is authorised for. This can be configured in the Status Objects tab when editing a Role (Configuration > Users and Roles > Roles tab).

Note that this does not affect which nodes are visible, just the Opsview Hosts listed beneath those nodes - therefore, for two users with different permissions the same map would have the same nodes and node positions, but the node styles could differ.

[6.7.5 and below] There are currently Known Issues affecting revoking Host Group access from User Roles, and use of the VIEWALL permission.

[6.7.6 and above] The NTVIEWALL permission allows users to view unimported hosts in the network topology map (this means that a user with reduced permissions may still be able to view information on some hosts/devices outside of their normal domain/network):

Upon loading, the Network Topology map will attempt to space nodes out and improve visibility.

By scrolling, you can zoom the map view in and out.

Nodes will interact with each other on the map to prevent overlap. However, you also have the option of dragging nodes to where you want them to go. When you drag a node, all connected unfixed nodes will be dragged along with it.

When you click and drag a node, it will be “fixed” where you place it. This is indicated by an inner border on the node:

When you leave the Network Topology map page and return later, nodes will retain their position if they were fixed, even if a new scheduled Network Topology detection runs (as long as they are still picked up by the new detection). Additionally, fixed node positions are shared between users, so if you change the map layout, it will change for all other users too.

We recommend that after loading your map for the first time, you fix your nodes in place where you want them for ease of use in future, especially if running scheduled Network Topology detection.