Opsview Cache manager is a fast, distributed in-memory key-value store, which can be used to cache session and other disposable data with a short shelf life. As the storage is only in memory, restarting the Cache Manager will potentially lose previously stored cache data and the components making use of this will then need to re-populate that data. The data is also shared between all nodes within the same Collector Cluster, meaning a check run on one node can access data previously stored on another.

The Cache Manager has an API available to client components with both HTTP and HTTPS endpoints. It also uses this API to communicate with other peers within the cluster to implement the distributed cache.

The component is deployed on Collectors by Opsview Deploy. The specific playbook is cache-manager-install.yaml.

Specific configuration options should be set in /opt/opsview/cachemanager/etc/cachemanager.yaml. Opsview Deploy will automatically configure Cache Manager peers within the cluster.

The following settings can be managed, but it is strongly recommended that they managed via Opsview-Deploy to ensure that they are synchronized within each cluster, otherwise the Cache Manager may not function correctly.

Get status of cache manager

Logs to syslog as per all other components

How does the Cache Manager work? 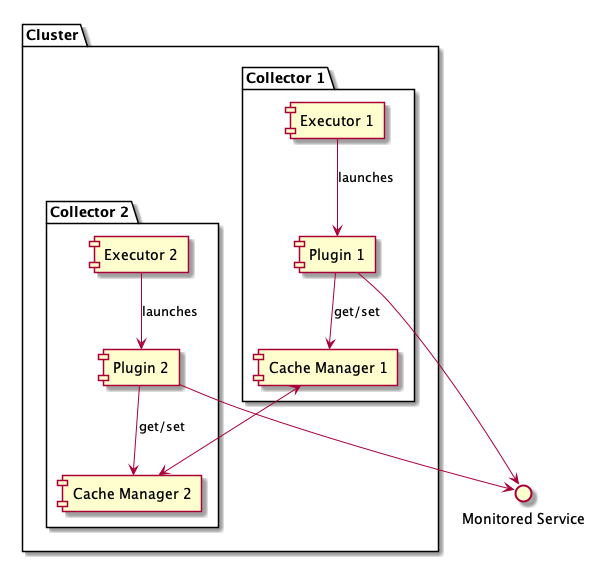 The Cache Manager is based on two main API methods, get_data and set_data.

The Cache Manager assigns data to a unique combination of key and namespace.

The namespace ensures naming collisions are avoided and potentially sensitive data cannot be read by other unauthorized plugins.

The key is the identifier for the data in the namespace specified. Data will be valid for the time specified by the TTL (default is 15 minutes).

When getting data, Cache Manager will wait a maximum amount of time for "The Lock".

What happens if a Cache Manager goes offline?

It depends on where the data was stored initially and how many Cache Manager's you have in your clustered environment.

Please note, the Cache Manager is not a synchronised data store between collectors. You will only keep the data if both Cache Managers made a call for the same data, prior to the secondary Cache Manager shutting down.

Building Plugins that use Cache Manager

Cache Manager is now fully integrated with plugnpy. You can import plugnpy into your Python monitoring script and make full use of all the Cache Manager's features.

plugnpy comes with an HTTP client which is able to connect to the opsview-cachemanager component. This allows the plugins to use the Cache Manager to store temporary data into memory which can be consumed by other service checks which require the same data.

The module consists of two classes, namely CacheManagerClient and CacheManagerUtils, which provide easy to use interfaces to communicate with the opsview-cachemanager.

A simple client to set or get cached data from the Cache Manager.

The Cache Manager client requires the namespace of the plugin and the host IP address and port number of the Cache Manager to be supplied. These are provided to the plugin as opsview-executor encrypted environment variables, or you can just specify them manually.

Once a Cache Manager client has been created, the get_data and set_data methods can be used to get and set data respectively.

To simplify calls to the Cache Manager, plugnpy provides a helper utility method get_via_cachemanager, this will create the Cache Manager client and call the get_data and set_data methods as required.

To see what is going on inside the Cache Manager as you are making calls, you must start it in debug mode.

Updated about 1 year ago